from the desk of Ida Barrett 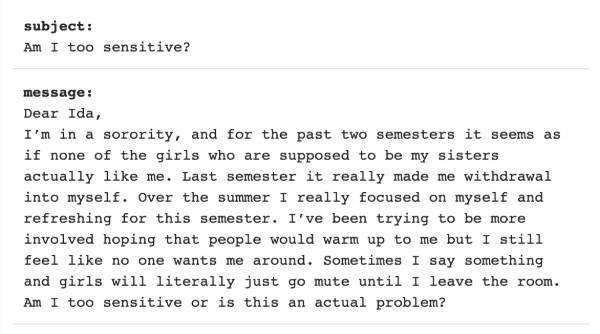 Feeling excluded or disliked or.... just not feeling "right" in a group is a valid and unfortunately extremely lonely experience.

I was not in a sorority but I did go through rush and that was BY FAR one of the worst weeks I think I've ever had as far as self esteem goes. I don't say this to bash sororities, I know a lot of women who absolutely loved being in a sorority and are still very active as an alum. Rush for me was TRASH because of the system in place. I don't think any of the girls I met were judgy or bitchy or rude or anything like that, I mean I am sure some of them are, there are hundreds of them at UGA. I am sure some aren't great. The system made it very obvious that some of the girls going through rush had already been "chosen" based on social media stalking and that some of us weren't even on the radar.

It was bad for me because of the same feeling that you described. I didn't have a place with those women.

I felt like a complete outsider no matter the effort I put in.

I quit. I pulled out and I am very happy I did.

One thing I've learned, and learned a VERY long time ago is that people are always going to dislike you. Maybe not dislike you, but not like you either, ya know? AND THAT IS OKAY.

All you can do is be kind and absolutely, unapologetically you.

I am not telling you to stop trying but maybe reevaluate if this group is right for you. You're not a "failure" if these girls aren't your girls. Although I know a lot of women who loved their sorority experience, I know just as many that dropped and were so happy that they did.

Maybe explore other groups on campus? What is an organization that you're passionate about? College is about getting out of your comfort zone and exploring passions to find your "thing".

If you do feel like it is worth trying and that you're getting some good out of look for someone in your sorority that maybe feels the same way. Ask someone completely random to lunch or to study. Be the person you need for someone else. My freshman year, I heard a lot of the sorority drama from my hall-mates and one common theme was that the girls felt the need to be friends with their "families". Their "twins", "bigs", and "grand-bigs". If that is what you're dealing with - GET A NEW FAM. If they suck, be nice to them and cordial but seek out other possible friendships in your sorority.

I am also not saying that this feeling won't follow you your whole life.

I love myself. I am confident. I think I am pretty and sometimes funny. I know I am a good friend and a good person.

ALL OF THAT BEING SAID...

I still feel like an outsider most of the time. I am 100% overly sensitive about being invited/included/liked blah blah blah.

I still feel the need to prove myself to people that I know aren't fans of me.

I still cry because "She hates me and doesn't know anything about me! Just because I raise my eyebrow and purse my lips doesn't mean I'm a judgmental bitch!"

Moral of the story though... don't dismiss your feelings. Acknowledge them and work out a solution.